There’s a cliché that goes something like people hire people…they don’t hire companies. This has certainly been true of Engedi Church in Western Michigan. Engedi sees about 2,200 people every weekend at one of it’s two locations and is all about advancing the Kingdom revolution of Jesus worldwide.

Seven(!) times over the fifteen-year history of Engedi, they have engaged House Right for projects. House Right’s Jeff Vander Kooi and Andrew Vandenberg both reside in West Michigan. So, when it comes to who you hire…Engedi hires Jeff.

“I feel like Jeff Vander Kooi is actually on our team,” says Executive Pastor Josh Blom. Josh was the Worship Pastor before recently stepping into the exec role for the church.  “Jeff is smart, stays current with gear, understands us, roots for us, keeps in mind our budget and knows our style. He’s always after what is best for the church. He knows the questions to ask.”

The church had originally worked with other companies based in Chicago, and there are local companies to them, but they continue to come back to House Right because of relationship. “We have done two pretty good-sized projects and a handful of others,” says Josh. 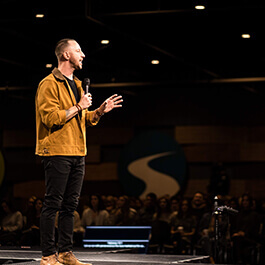 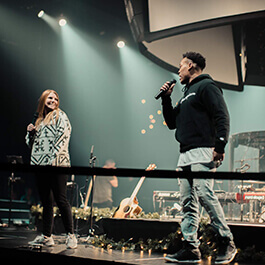 Over the course of the last 5 years, House Right executed a major project to install the necessary video and lighting equipment to allow Engedi to launch their first satellite campus. That system included a full overhaul of their lighting system, installing over 30 ETC Source4 LED fixtures for front light and designing a lighting plot that works well to capture video on a platform that is in the round. The video system consisted of 4 Panasonic Professional Broadcast cameras and a 2ME Ross switcher installed in a new video control room space. House Right has done a few other smaller projects on their main campus such as the construction of new kids and adult classrooms, a lobby video display system, a video projection overhaul of the students room, and a broadcast audio/recording studio control room. They also have done full AVL for 2 portable campuses. These are among over half a dozen other small projects.

“Words that describe House Right to me are words like quality, dependable, loyal and available,” says Senior Pastor Brian Aulick. Brian is the founding pastor and has been there since the beginning. “When we’ve had questions they are there, they give us options and encourage us to do the right thing. They get us.” “We recommend them to others,” says Josh. Helping churches like Engedi achieve their vision is House Right’s mission.

About the Author: Matt McKay